International participants at the first session of RSPO’s Smallholder Academy in Medan, Indonesia

The vital role of small producers

Small producers make up the majority of oil palm farmers. That means they have an important role to play in reducing the environmental damage of palm oil, the world’s largest edible oil crop by far. But including them in sustainable supply chains is challenging. The Roundtable for Sustainable Palm Oil’s new Smallholder Academy looks specifically at the issues facing small oil palm farmers and how to overcome them.

The academy’s official launch will take place at the 17th annual Roundtable Meeting on Sustainable Palm Oil in Thailand in November. However, it got a soft opening in August, with palm oil producing regions invited to Medan, Indonesia, to participate in its first ever session. The Solidaridad office in Colombia was selected to represent Latin America because of its track record in improving palm oil sustainability.

At the academy, I saw the potential of the tools we’ve developed for small producers

How to support continuous improvement

María Goretti Esquivel, Manager of Solidaridad’s palm oil programme in Colombia, went to Medan for the session. “It was an enriching experience,” she says. “I realized the importance of cooperation between oil palm producing countries to increase the sustainability of the sector. On a practical level, I saw the potential of some of the tools we’ve developed for small producers, such as digital solutions to support their process of continuous improvement and training materials tailored to their needs.”

It was no coincidence that Indonesia hosted the event: the Southeast Asian country is the world’s biggest palm oil producer. While the sector creates an income for thousands of Indonesian farmers, the environmental impact, particularly of deforestation, has caused global concern. Thanks to the academy and other RSPO initiatives, the lessons learned are being taken forward to help it and other countries establish more sustainable palm oil industries. 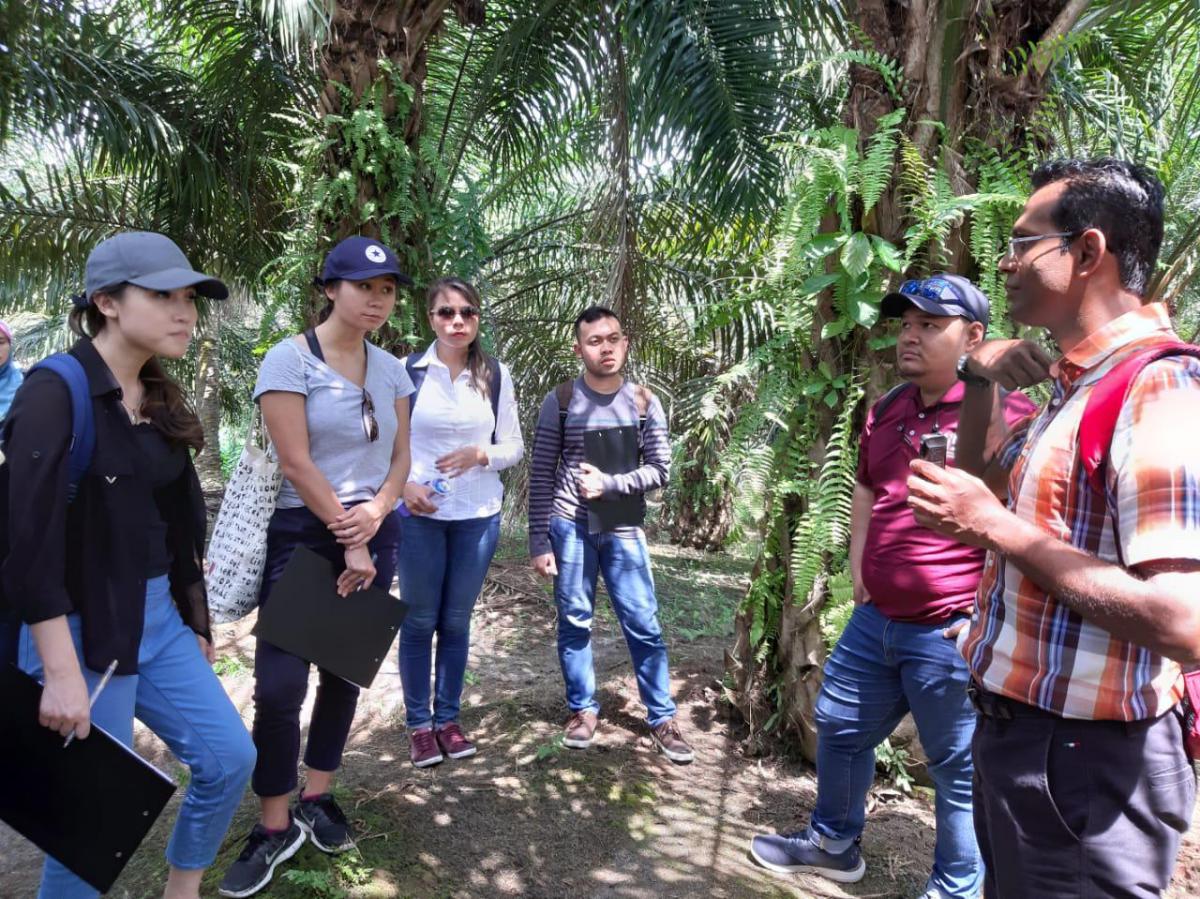 Visit to an oil palm plantation during the academy’s session

The sector is growing all over the world. In Maria’s homeland of Colombia it is still fairly small, but it has seen similar impacts, both positive and negative, to Indonesia. “Palm oil has boosted economic growth in rural areas, infrastructure development, job creation and poverty alleviation. However, it has also triggered land tenure and deforestation issues, among others,” she explains.

The international community is especially concerned about the risk of deforestation in South American countries like Colombia because of the presence of the Amazon rainforest. According to figures from the Colombian Institute of Hydrology, Meteorology and Environmental Studies, the sector is accountable for only 0.25% of the country’s deforestation rates. Most of the oil palm planted replaces other crops on land already used for agriculture, far away from the Amazon biome. Even so, the national sector has signed a zero deforestation agreement.

By looking closely at Indonesia’s experience, Colombia can learn how to create awareness of the importance of good practices

The Roundtable for Sustainable Palm Oil (RSPO) was set up in 2004 to reduce deforestation and other negative effects of the sector. These days, 21.5% of Indonesian and 15% of Colombian palm oil is RSPO-certified. (The global average is 19%.) Membership of the global body is voluntary, but it has inspired Indonesia to set up a similar, mandatory certification body (Indonesian Sustainable Palm Oil or ISPO).

“By looking closely at Indonesia’s experience, Colombia can learn how to create awareness of the importance of good practices and how to support the process of continuous improvement,” says María. “The road to achieve greater volumes of sustainable production is long. At Solidaridad, we are proud to contribute to the cooperation between countries with meetings, exchange of experiences, technology and knowledge to make the world’s most common oil more sustainable.”

Discover more about our work in palm oil